on November 11, 2019
People are pretty agitated about Austin's proposed Land Development Code re-write. What's lost in all the noise is that there are two distinct concepts wrapped up in the same discussion - Density and Affordability. Their Facebook relationship status would have to say "it's complicated".

Density is very simple; it's the number of units for a given land area. One house on a central Austin lot is less Dense than 2 or 3 on the same lot, regardless of their size. 2 or 3 "tiny homes" that are 200 s.f. each would be Denser than one 6,000 s.f. house.

We can add additional Density to the fabric of Austin's neighborhoods in two ways: Big or Small.

Small:
We can add small ADU's (aka: garage apartments or Granny Flats), allow for relatively small Duplexes and allow small-scale multi-family into the neighborhoods. These are all familiar to us, as they were common in the 40s through the 70s until they were prohibited by a new zoning code in 1984. If you live in a central Austin neighborhood, you see these uses every day.

Big:
This is what's proposed by the new development code. They're trying to create incentives for increased density, and the incentive built into the code is greater building size, via very generous increases in allowances for height and FAR. FAR (Floor Area Ratio- or as I like to say "Future Affordability Ratio"). Our illustrations show just how massive these buildings will be. We all know that dividing the cost of a lot between two $800k condos isn't going make a meaningful difference with affordability.

Here's a very simple comparison illustration. Same Density on both lots (3 units), but the economics are wildly different. The existing homeowners on the right could finance and build the 800 s.f. duplex (particularly if we create an anti-displacement bond fund for ADU's), but the folks on the left would have to sell out to developers, since only developers have access to the cash needed to build the giant duplex that's fostered/permitted by the proposed code. 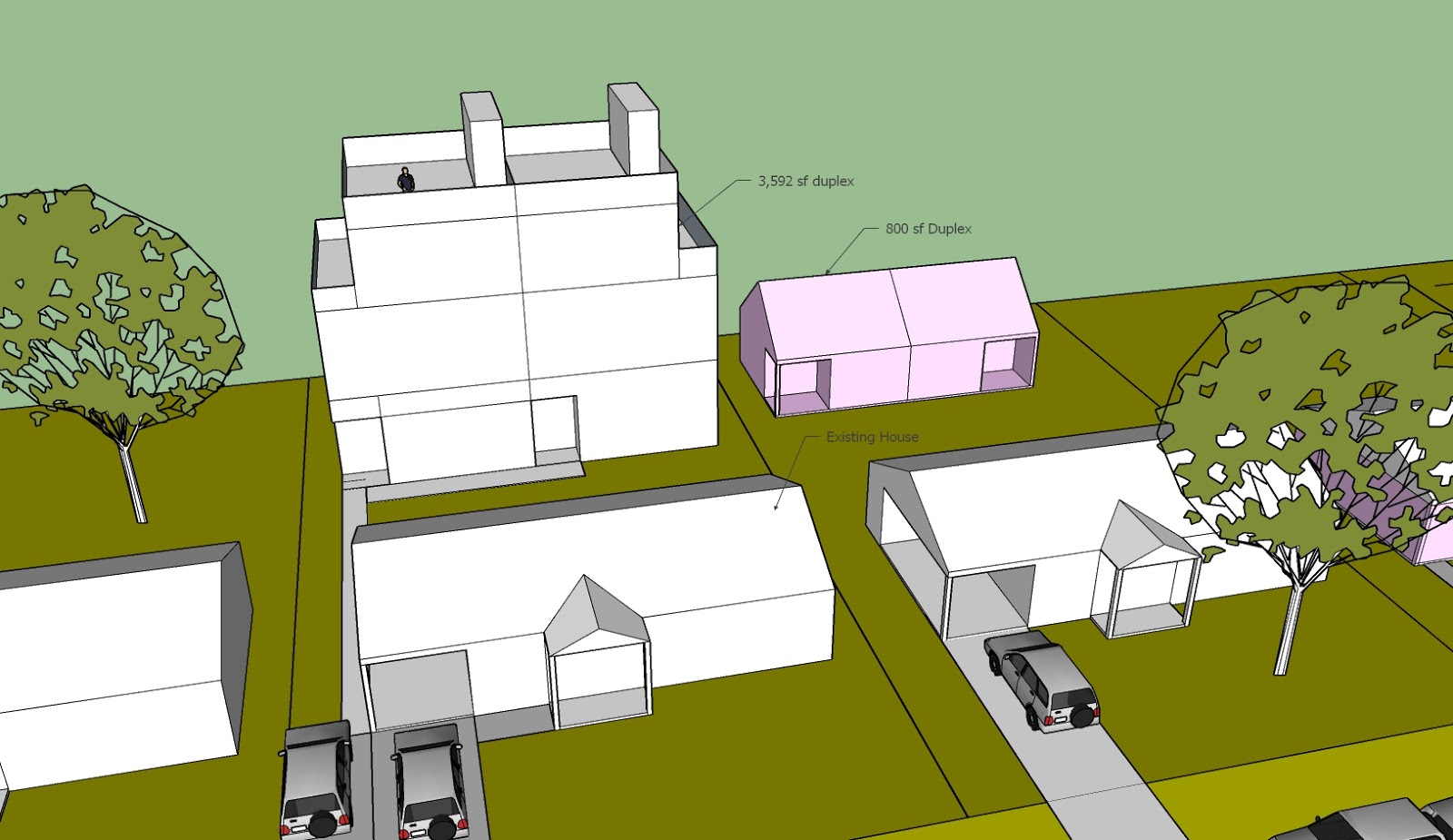 Pros/Cons:
Either variety of added density comes with some potential inconveniences if it arrives next door to your home: more cars, more trash cans, less privacy in your back yard, more noise. The question for Austin is whether we make those compromises for only the wealthy or if we use those tools to help lower income residents find homes in the city.

With the proposed code, we weren't given an opportunity to consider any options. By giving away massive increases in development entitlements on every single piece of land in the city in one shot, we're missing the chance to add housing options that enhance and diversify our communities. The only "solution" being offered by the City right now is GIANT housing that will accelerate displacement and gentrification and drive housing costs higher at an even faster rate than we see today.

This isn't a PLANNING process- it's simply a large-scale entitlement handout to the real estate development industry. Tell the Mayor and the Council Majority that Austin deserves better.
Be sure to thank the Council Minority while you're at it (Alter, Pool, Tovo). They're swimming against the tide every day at City Hall, and they need to know we appreciate their courage and dedication to ALL of the people of Austin.

Then get out there and talk to your neighbors about how they feel about adding a bit of density in your neighborhood.

Thank you for being part of that discussion!!

Here's the whole story of this situation in 3 images.

In 2017, they all went to the landfill and were replaced with 12 duplex units that maxed out every inch of the current code's entitlements. The Street View image below is from approximately the same spot. The new duplex units are about 1,700-1,800 s.f. each, and all sold for more than $750k per unit. We lost lots of great neighbors that helped Rosedale have more economic diversity.

We also lost a shit-load of trees.


Under the proposed code, the buildings can be even larger and taller than what was built in 2018. How does that help Austin with its Affordability problems??


Why are we designing a code that creates massive, expensive housing?? 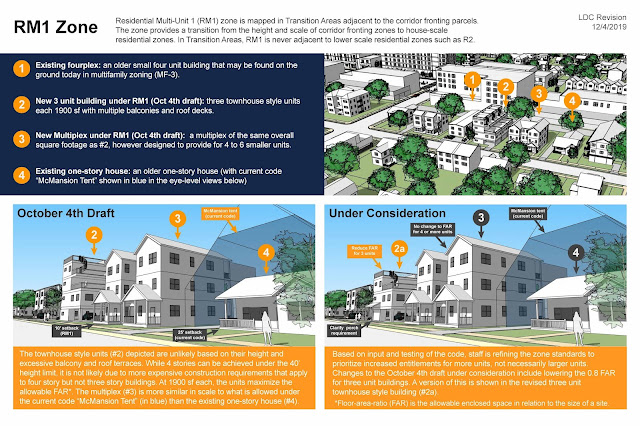 First look at the City's own modeling scenarios!!

The City released some of its own 11th Hour model images yesterday via a series of promotional posters. They're super entertaining and enlightening!!

Our basic question for you is: do these images help to make the case for adopting this code? They (staff, politicians, interest groups) have been accusing us of "fear mongering" for the last month or so as we've shown Austin what the code will look like in the real world; do the City's own images help to allay anyone's fears/concerns?? Are they now "fear mongering", or is this just what their code looks like?

We'll break this into a few blog posts for easy digestion. First, let's look at their RM1 illlustrations in a "Transition Zone" setting.

If the pictures didn't tell the whole story, here's a bit more to consider:

Building #1 in their images is a replica of the 4-unit building from the mid 1960's that we modeled in our RM1 comparison. It shows how small, compatible and… 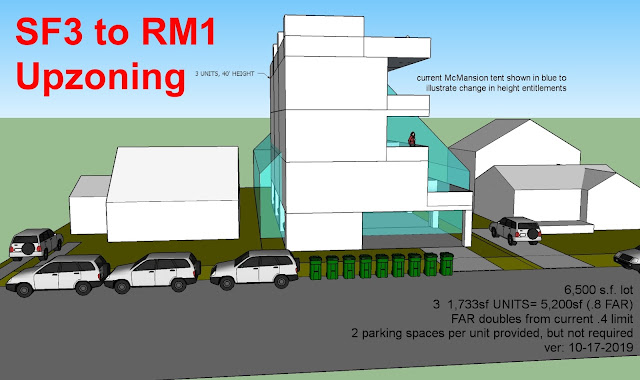 Where are these illustrations coming from??

This poorly-designed little blog is the work of Chris and Gina Allen. Normally, we run a little mom and pop architecture practice from our home in Rosedale, but this month, we've pretty much dropped that gig to focus on doing something the City and its consultants have refused to do since the beginning of the CodeNEXT process: show Austin what the code will produce.

Chris is an architect with more than 30 years of experience in dealing with Austin's development code. He  served on the City's McMansion Task Force (creating Austin's original Affordability Ordinance) in 2006, then on the City's Code Advisory Group for CodeNEXT.

Gina's degrees from UT Austin include one in Real Estate and Urban Land Development, and she worked in real estate feasibility and market analysis before shifting to working in the design practice.

Together, they've worked for decades on behalf of their Rosedale neighborhood with an eye toward maintaining the diversity and affordabilit…